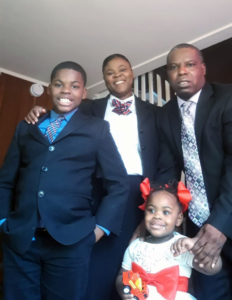 a tragic earthquake and trying to rebuild your life in the middle of one of the poorest countries in the tropics. Then imagine participating in a community-wide protest to bring the plight to the attention of authorities only to get woken up in the middle of the night by a furious pounding on your front door. Your front door is bashed in, you are pulled from your bed, dragged into the street and beaten in front of your wife and four-year old son.

That is what happened to Salvanias “Petey” Petit in August of 2013 in Haiti. Political gangsters representing the ruling party at that time were intent on silencing any opposing opinions.  After a ‘bush’ doctor helped him recover from the severe beating, Petey said a heartbreaking farewell to his family and boarded a boat to the U.S. Virgin Islands, seeking political asylum. The opposition would kill him if he stayed. He worked odd jobs until he saved enough money for a flight to Florida in December 2013. There, Petey applied for his green card, keeping a positive outlook for the future. Finding work in Florida was difficult, so he moved to Salisbury, Maryland, after hearing there were jobs and a chance for a better future there.

After two years of saving, Petey was able to bring his son, then six-years-old, to the United States. His wife followed a year later.

We met Petey and his wife Ketlie almost a year ago. He works in manufacturing and Ketlie stays home with their daughter Ruth. Before Petey goes to work, he volunteers in the Habitat ReStore to complete his partnership sweat-equity hours. The Petit family will be purchasing their home in 2020.

Petey and his family dream of homeownership. You can make that happen with a gift this season.

God blesses those that bless others.

We hope this Holiday Season that you consider a gift to your local Wicomico Habitat for Humanity so that another family might know the value of homeownership.

This fall, we are finishing up the construction of our 68th home built at 711 Grace Street in Salisbury Maryland. The Deravine family will buying this home and will spend Christmas in their new affordable home. Their mortgage payment will be around $650 a month for a four-bedroom, 2-bath modest home. We still have about $30,000 left to raise to finish this home.

Did you know that average monthly rents in Salisbury are over $1,000 a month? How can a low-income, hard-working family, with only the father working in manufacturing, earning just a few thousand above the federal poverty level, afford rent of $1,000 a month? With his income around $35,000 a year, his rent has been over 50% of his after-tax paycheck on rent! Is that right? Is that fair?

Wicomico Habitat changes the narrative for families with zero percent home loans. We build homes – but with your help, we build hope for their futures. The impact is real – I see it every day and I hear it when the parents beam about their children and their educational achievements. Economic stability is the key impact that Habitat has on low-income families. We could not build this home without the generous donations from our people like you. Our goal is to sell four homes in 2020.

When a family comes to us to apply to be a homeowner, we follow all of the fair housing and fair credit rules. We know that there is an underlying story, but we do not ask them until after they are approved by our board of directors. The Petits’ family story gives perspective on the freedom our country represents and the hope that Habitat for Humanity provides for the people we serve. This season, Habitat for Humanity of Wicomico County will raise money for the Petit’s future home.